Perhaps one of the best known and certainly largest pharmaceutical companies in the world today is Johnson and Johnson. Founded in 1886, from New Jersey, the 3 Johnson Brothers initial business aims were creating surgical supplies, household products, and medical guides. Since then, the company has grown to have over 130,000 employees and its 2020 reports have claimed revenues of over $86.6bn.

Today, the firm specialises in three main markets: consumer health products, owning companies including Listerine, Tylenol and OGX, the pharmaceutical industry claiming from it revenues over $45bn and the medical device market.

However, with such big success, lurks scandal, in J&J’s case, a multi-billion-dollar scandal.

How does asbestos and baby powder link?

In 1894, Johnson and Johnson began the production of their talcum-based baby powder, which as of today, accounts for just 0.5% of their total sales. The powder, which is widely used for keeping skin ‘dry and healthy’, is made from talc deposits. According to the FDA, talc is a naturally occurring mineral mined from the earth, composed of magnesium, silicon, oxygen, and hydrogen deposits. The problem arose, however, when people started suspecting that the pharmaceutical giants baby powder was the cause of many peoples developing cancer.

According to the cancer institute Asbestos.com, asbestos comes in six different forms: chrysotile, amosite, crocidolite, anthophyllite, tremolite and actinolite. Like talc, asbestos is found as a natural mineral underground. The concern, however, is that the two can be found near each other, and in some cases, contaminate one another.

A 2018 study published in Epidemiology reported “a consistent association between perineal talc use and ovarian cancer,” with some variation based on the type of study and ovarian cancer subtype. Furthermore, the International Agency for cancer research (IARC) currently classifies the genital use of talc-based body powder as “possibly carcinogenic to humans”.

An in-depth review by Reuters published in 2018 revealed that Johnson and Johnson have had a long history of asbestos-positive lab results. A document released in 1975 revealed that some tests came back as asbestos positive, concluding that ‘some’ asbestos levels were ‘rather high’

Only a year later, when the FDA (Food and Drug Administration) began placing restrictions on consumer products, Johnson and Johnson assured the regulator that ‘no amphiboles or serpentine minerals were detected in any samples.

Speaking more recently, in October of 2019, the Food and Drug administration ran a series of tests on 50 of Johnson and Johnson’s baby products, resulting in a batch of baby powder testing positive for asbestos:

‘The U.S. Food and Drug Administration (FDA) is alerting consumers about Johnson’s Baby Powder Lot #22318RB. A sample from this lot was found to contain chrysotile fibers, a type of asbestos. On October 18, 2019, Johnson & Johnson voluntarily recalled this product, and consumers who have this lot of baby powder should stop using it’.

The lawsuits flood in

For Johnson and Johnson, presence as a multi-billion dollar company usually lurks opportunity for scandal, unfortunately, for J&J, claims have developed into lawsuits, far greater than expected.

According to Reuters, the earliest claims of suspicion date back to 1997, with Darlene Coker who suspected that Johnson and Johnson were responsible for her mesothelioma cancer. Her plaintiff was dropped, unable to provide enough evidence to the jury that Asbestos was present in J&J’s baby powder. However, as of today, lawsuits are pilling in the thousands and Johnson and Johnson are no longer able to escape the trouble.

In February 2016, a Missouri jury determined that Johnson & Johnson was responsible for the death of Jacqueline Fox, who claimed to have been using talcum powder for personal hygiene for more than 3 decades. The total reward given was $72m, including $62m in punitive damages and $10m in personal damages.

Shortly, after, in May 2016, a jury found in favour of Gloria Ristesund, who claimed Johnson and Johnson was responsible for the development of her ovarian cancer. She claimed to have used Johnson and Johnson’s baby powder for decades. Gloria was awarded $55 million. However, later the Missouri Court overturned the verdict, finding that the court lacked jurisdiction.

In November 2016, a California jury granted a verdict of $65 million for Deborah Giannecchini. Deborah who had been using talcum powder for 40 years, believed J&J was responsible for her ovarian cancer. She claimed that the company ‘failed to warn’ against any effects the product might have. Sixty-five million dollars of the verdict was for punitive damages.

In May 2017, a St. Louis jury awarded $110 million to Lois Slemp who was being treated for severe ovarian cancer. She claimed to have had used baby powder for over 40 years. Punitive damages were slammed to both Johnson and their supplier, Imery’s Talc America.

In August 2017, Eva Echeverria received a $417 million jury verdict. She claimed to have used baby powder on a daily basis from the 1950s through to 2016. The verdict included $68 million in compensatory damages and $340 million in punitive damages.

As high as these lawsuits may already sound, they do not compare to what happened a year later. In July 2018, a St. Louis jury awarded 22 women $4.69bn against Johnson & Johnson. Individually, each woman received $25m in compensation claiming the company caused them to suffer ovarian cancer through the use of baby powder and asbestos fibres. Johnson and Johnson’s attempt to overturn the verdict failed, however, it did reduce the payout down to $2.12bn.

As of February 17, 2021, more than 27,000 lawsuits were pending in federal court. Simultaneously, Johnson and Johnson still claims that their talcum powder is ‘asbestos free’ and safe to use. 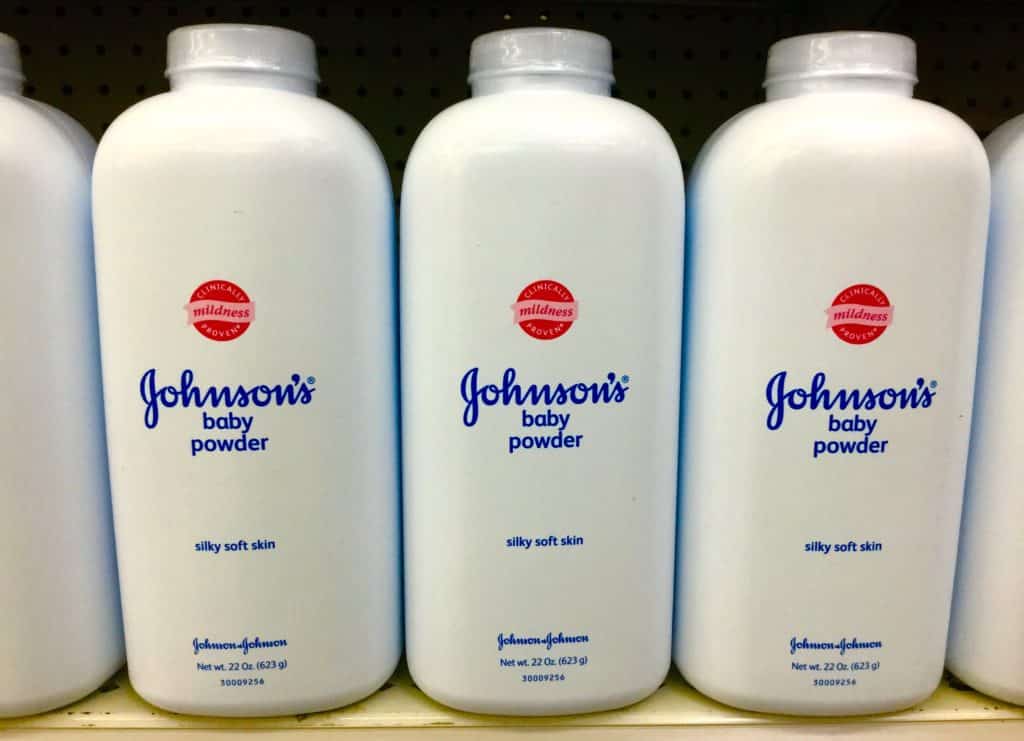 In March 2020, Johnson and Johnson made the decision to discontinue their baby powder in Canada and the United States. The company claimed that consumer habits have changed ‘fueled by misinformation around the safety of the product and a constant barrage of litigation advertising’.

Today, Johnson and Johnson continues to claim that its baby powder is 100% safe, using the quote ‘science not sensationalism’.

The company also points to some studies that show that talcum powder is safe. The Nurses’ Health Study started in 1976 followed over 78,000 women for 24 years of which 31,000 used talc. The study showed ‘no overall increase in the risk of ovarian cancer’.

It appears that at the heart of all these different women is the same story, decades use of talcum powder and cancer. The real question however is: is talcum really dangerous?

Perhaps these women have been misled by certain science, or on the other hand, perhaps Johnson and Johnson truly is guilty of the deaths of thousands of woman.

Time is yet to tell.